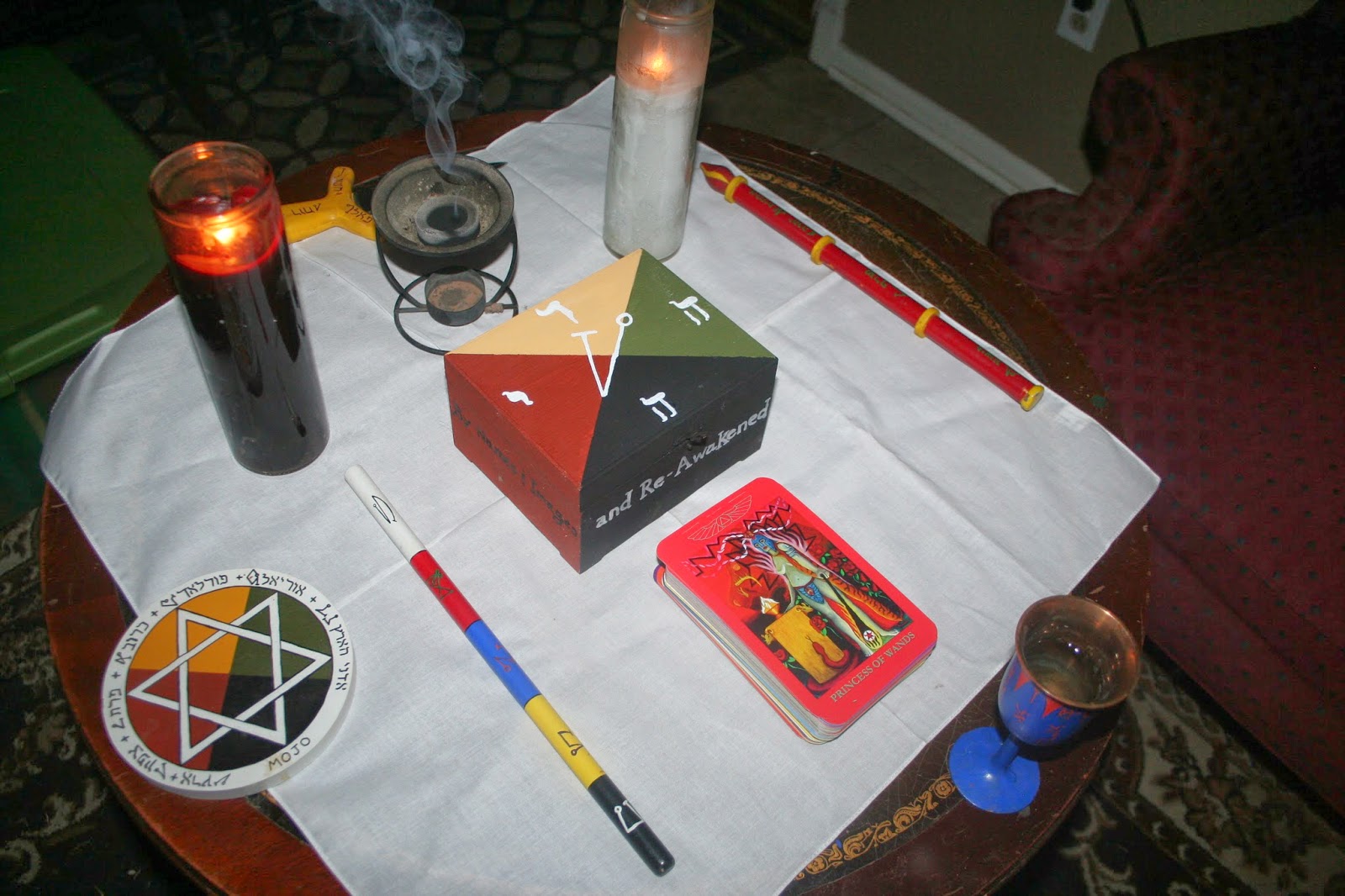 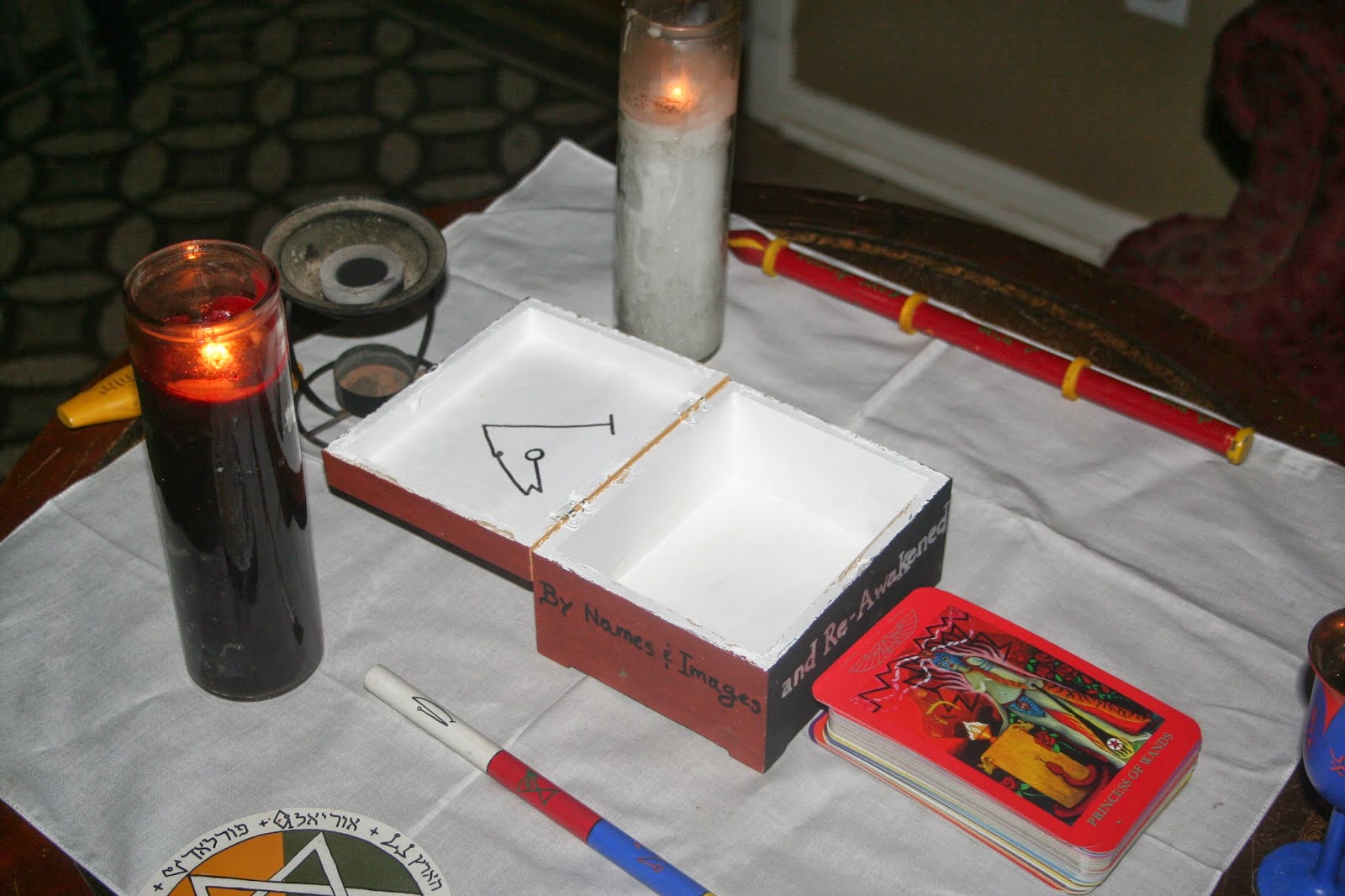 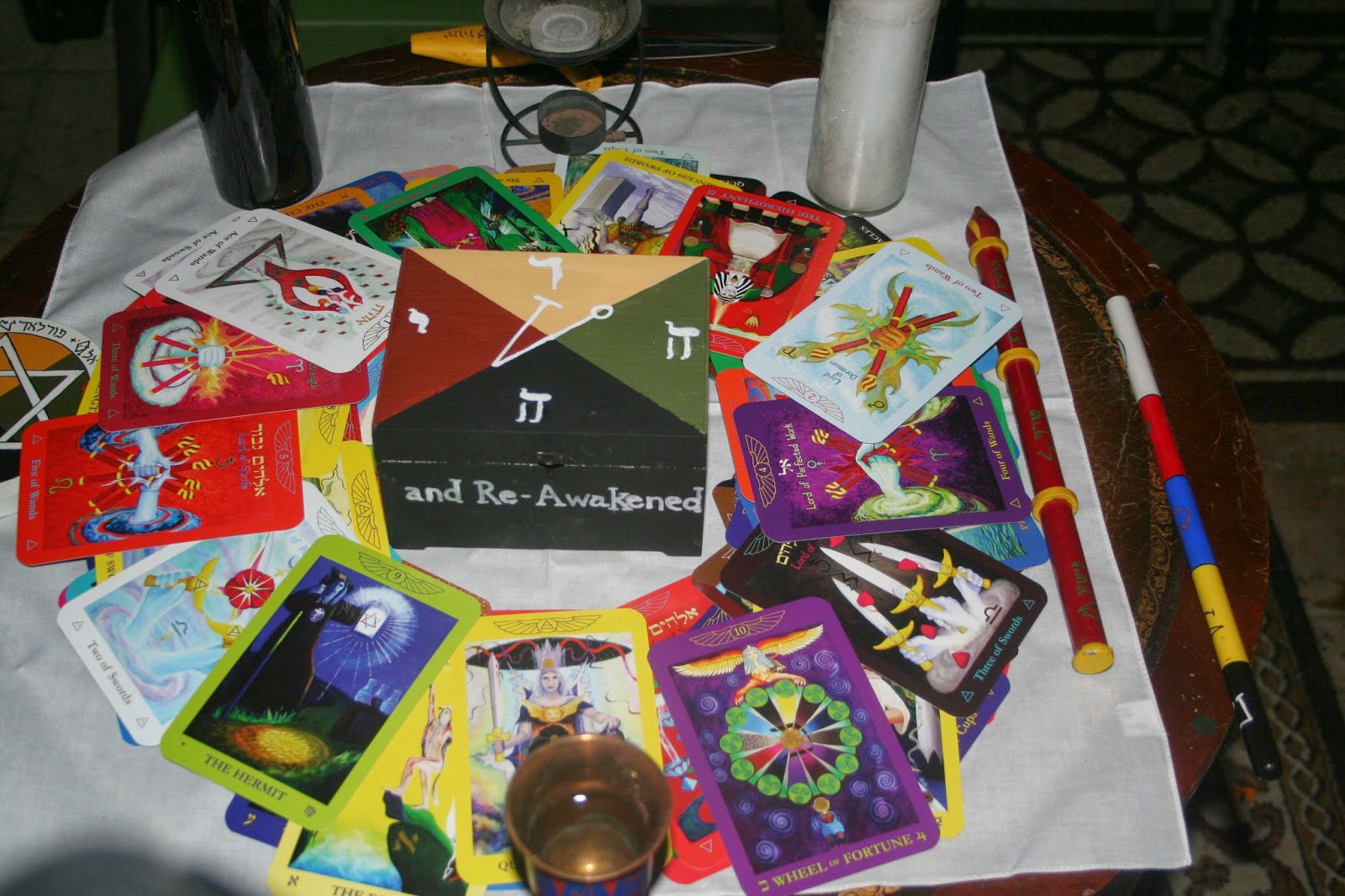 what I am doing is utilizing an interpretative Four World painting scheme- the inside of the box-White for Kether/Atziluth-as Archetypal Imagery-and the outside Citrine/Olive/Black and Russet for the manifestational aspect of Assiah/and the Active principles of practical applications of the Wisdom that the cards present...
I am fumigating the interior of the box in the essence of Spirit/Kether with Ambergris, and the outside of the box in the essence of Earth/Malkuth with Dittany of Crete, Poppy, and Patchouli- based upon the 'Essence of the Spheres'from The Magical and Ritual Use of Perfumes by Richard Alan & Iona Miller...
the outside of the box will be painted in the Briah (Queen Scale) colors of Malkuth-Citrine-AIR of EARTH (Hod & Netzach, Russet-FIRE of EARTh (Hod & Yesod), Olive-WATER of EARTH (Netzach & Yesod), and finally Black-EARTH of EARTH (Grounding in Malkuth)
Then-based on the ADNI Formula for the GD Outer Order work-FIRE (Russet)-is Yod, WATER (Olive) is Heh, AIR (Citrine) is , and EARTH (Black) is the final Heh - YHVH.
the FIRE/Russet side will say: By Names & Images, the WATER/Olive side will say: Are All Powers, the AIR/Citrine side will say: Awakened &, the EARTH/Black side will say Re-Awakened...
Atop the box-is the center will be a white Rose Cross sigil for the Tarot Angel HRU...

In the center of your temple or sacred space you will need an altar that faces East. On the Eastern side of the altar, place a black and white pillar candle (left and right respectively) and a small white votive candle just to the east of them. Place your unopened deck in the center. If the deck has been previously opened and used, before starting the ritual you should wipe each card with a clean white cloth that has been charged for that purpose.
Around your tarot deck, place the following: on the east side, the AIR dagger, on the south side- the FIRE Wand, on the west side-the WATER Chalice, and on the north side, the EARTH Pentacle.
Spend a few minutes in relaxed meditation. Then perform the LBRP.
Stand west of your altar, facing east. Trace a circle and a Lesser Banishing Pentagram over the unopened deck of cards.
With your Tarot Wand-strike or touch the deck three times and say:

With each stroke of the wand, intone one of these supernal names. Then say:

"Unto the highest do I (state your magical name) consecrate these cards of arte, that they may become true reflected images of thy manifestation and splendor. Not to my name but to thine be the power and the glory."

Trace a cross over the deck and say:

"In the divine name IAO (ee-ah-oh), I invoke the great angel Hru (heh-roo) who art set over the operations of this secret wisdom. Lay thine hand invisibly on these cards of arte and give them life. Anoint them with the divine science so that through their use I may obtain true knowledge of hidden things, to the glory of thy ineffable name. Amen."

Visualize the hand of a mighty angel over the deck glowing with a bright white light. The tarot deck should also be visualized in a brilliant halo of light.
Strike the tarot deck again three times with the Tarot Wand. Then visualize a great white light above you. Fill yourself with its divine power. Then project this energy directly at the deck using the Sign of the Enterer: do this projection 3x.
Then give the Sign of Silence.
Now open the deck and take out the cards. Fan the cards out in a circle on the altar. With your tarot wand, trace a cross in the air above the cards and say:

"By names and images are all powers awakened and re-awakened."

Thrust your wand head through the center of the cross.
Gather up the cards and place them in their tarot box. Then say:

"I now release any spirits that may have been imprisoned by this ceremony. Depart in Peace. Go with the blessings of Yeheshuah Yehovahshah" (yeh-hay-shoe-ah. Yeh-ho-vah-shah).